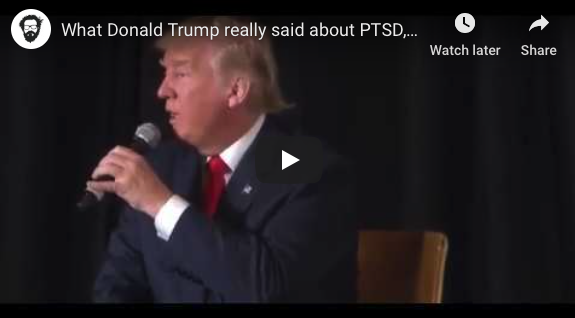 Let's do something meaningful together

The then GOP presidential candidate Donald Trump did not say veterans suffering from PTSD are “weak,” “unfit,” and “can’t handle” military service. After a Retired American Warriors town hall campaign event was held on 3 October 2016 in Herndon, Virginia, Republican presidential candidate Donald Trump was widely accused of insultingly asserting that veterans who suffer from Post-Traumatic Stress Disorder (PTSD) are weak.

Occupy Democrats was one of many political outlets claiming Trump had called veterans with PTSD weak and had insulted those who required mental health services after serving, and that the news media largely ignored his comments.

In Trump’s complete response focused largely on committing to an increase in veterans’ services, not on deriding disabled veterans. He indeed flattered “folks in this room” for being “strong,” but he also expressed empathy at length for those military people that suffer from PTSD.